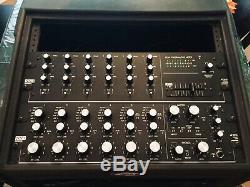 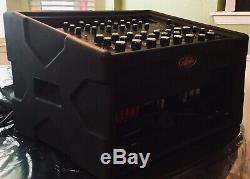 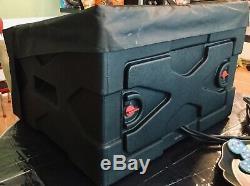 They have been in home studio their entire life and are in immaculate condition. Every knob, switch, output, input, etc...

Works 100% as they did when the MP/XP were new. I installed anti-vibration screws for the MP/XP units. Only 1 power cable to plug in, the Furman does the rest as both Rane MP/XP units are plugged into the Furman. It is ultra nice to have and protects the overall investment. This is an older unit that I used only a few times.

It was nice to record directly from the MP/XP and then transfer the audio into my DAW. These were instrumental as you can see in one of the pics that the amount of room below the MP and the top of the Furman does not allow for adequate space for traditional XLRs. There I installed the flex-XLRs there. They sound amazing for most any user and matched the sound quality that the Rane is known for.

I reserve the right to end the listing if item sells locally. Below are list of included items and their part numbers for you to research. Review of the MP/XP have been done many times over. I chose some verbiage from emusician that sums up nearly every review. SKB: DJ Shuttle Rack 1SKB-84DJ.

Planet Waves: Swivel Mic/XLR cable. Anti-Vibration screws for the MP+XP units. The MP 2016 offers six separate stereo input channels; individual master volume controls for the booth and house outputs; 3-band EQ for the master outputs; and a headphone cueing section with a 6-position Source switch, a Cue/Master selector switch, and a headphone level control. The device also comes with a Cue/Master switch for the booth output, allowing DJs to either monitor the signal going to the house system or cue up material by listening to the sound over the booth monitors instead of using headphones.

The Master section also includes a Mono/Stereo switch, an Effects Loop engage switch, and a switch for engaging the XP 2016 Processor. Channels 1 to 4 all feature a phono preamp and a phono and line-level switch. Channels 5 and 6 both provide a balanced mic preamp with a mic and line-level switch, as well as rear-panel trim controls for adjusting gain, treble, and bass.

All six channels have a 6-position rotary switch for selecting the channel input source or any one of five auxiliary inputs. In addition to stereo input jacks for each channel (1 through 4 are RCA; 5 and 6 are XLR)and the auxiliary section (all RCA), the mixer offers balanced XLRand unbalanced RCA house outputs, unbalanced RCA booth outputs, a stereo effects loop with ¼-inch jacks, and a pair of stereo tape outputs (pre- and post effects) with a trim control for adjusting output level.

In all, you can connect up to 11 sound sources to the MP 2016 at once, control up to 6 sound sources simultaneously, and manage volume levels for the house, booth, and headphone outputs from one location. The EQ knobs allow you to dial in up to 10 dB of boost or fully kill the frequencies in the control's range (treble is above 4 kHz, mid is between 4 kHz and 300 Hz, and bass is below 300 Hz). The XP 2016 also features a crossfader with adjustable contour, and 3-position switches for each input channel let you assign the signal to the A or B side of the crossfader or post crossfader. For even more detailed level monitoring, the XP2016 includes a 10-segment stereo LED meter that displays the signal level of the source selected in the MP 2016's headphone section. DJs who need ultra precise control of their mixes will absolutely love the MP 2016 and XP 2016 combo.

The latter is really a necessity for today's DJ applications. Offering the ultimate inflexibility, the Rane is best suited to DJs who like to slowly and subtly mix in elements from various sound sources and perfectly blend the levels of each channel.

A crossfader simply can't provide the same level of control. The Rane's channel and auxiliary inputs enable DJs to use just about any imaginable combination of turntables, CD players, samplers, groove boxes, drum machines, synths, tape loops whatever. The creative possibilities are mind-boggling. But the MP 2016's sound quality is what really makes it worth its rather lofty price tag. It has become the mixer of choice among major nightclubs and top DJs for good reason: no other mixer model sounds as clean or punchy.

Even at extreme boost or cut settings, the Rane's EQ controls remain noise-free. If you've used only cheap DJ mixers before, the enhanced range that the MP 2016 reveals from vinyl records may surprise you. Granted, rotary mixers aren't for everyone, and sound quality this good doesn't come cheap. The MP 2016 and XP 2016 Processor area little too expensive for the average home-DJ setup.

However, if you produce your own mix tapes or CDs or you're seeking a high-quality mixer for a club installation, the MP 2016 is one of the best DJ mixers ever made. It's worth every penny to anyone whose primary considerations are sound quality and versatility.

The optional XP 2016 is also pricey but essential for modern mixing applications. The item "Rane MP2016 XP2016 Rotary DJ Mixer SKB Rack Case" is in sale since Sunday, August 4, 2019. This item is in the category "Musical Instruments & Gear\DJ Equipment\DJ Mixers". The seller is "djjarom" and is located in Norman, Oklahoma. This item can be shipped to United States.