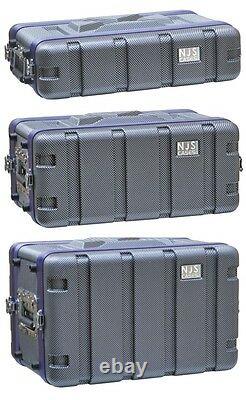 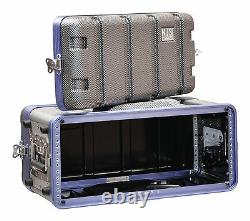 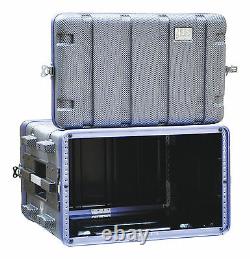 NJS SHORT ABS Grey/Blue Rack Flight Case Front and Rear Opening. With a Choice of 2U, 4U & 6U Rack Heights. PLEASE NOTE THESE ARE SHORT DEPTH (210mm) CASES NOT FULL DEPTH CASES. IF YOU REQUIRE FULL DEPTH (425mm) CASES - PLEASE SEE OUR OTHER ITEMS. Ideal to house 19" Rack-mounted amps, processors, effects units, mixers and many other types of standard 19" rack units.

PLEASE NOTE: The courier charge is for mainland UK and does not include Scottish Highlands, Northern Ireland, Republic of Ireland, Isle of Man, Isle of Wight or the Channel Islands. We will always go out of our way to source the product you are looking for. Worldwide Music is owned and run by John Greves (MD), Adam Greves and Andrew Greves. John had been involved in the music business all his adult life, beginning with his involvement with Hawkwind circa 1969 (at the tender age of 17) through his years with Ghost, Robert Calvert's'Capt. Lockheed and the Starfighters' and finally having spent 1999 - 2007 touring and recording with the original members of Hawkwind as'SPACE RITUAL. Andrew has been everything from Tea-boy to Sound Engineer and has toured extensively with Older brother John. Andrew is a fine musician in his own right having played the Eb horn in the Town Silver Band (when he was considerably younger). Adam (son of John) plays keyboards and guitar but his love is acting and he has played some major roles in theatre, various commercials, rock videos and even the odd film part (including a small part in a Harry Potter film). Adam now writes and directs and his own films. John owns his own 48 track recording studio nearly all of which has been supplied by WorldwideMusic (of course). Among many other luminaries, Worldwidemusic have supplied equipment to: Abbey Road Studios, BBC Television, Caravan, Crystal Gayle, Granada Television, Heart Radio, The English National Ballet, The Aldwych Theatre, Danny Wilson of Showaddywaddy & Wishbone Ash, This Little Girl and the Dillicats, Razorlight, Foel Studios, The Groundhogs, Simon Climie (of Climie Fisher), Juicy Lucy, Keith Pearson, Mark Hewins of the Bob Geldof Band, The National Maritime Museum, Virgin Radio, Space Ritual (Hawkwind), Two Wounded Birds, Lotus F1 Team, Aurora, individual musicians, producers, technicians and recording studios all over the world. For larger packages we use a courier service such as Interlink or DPD. Due to the Increase in Scams We now log all security numbers and security mark all high-value items. This will not affect genuine buyers in any way. Please see our shop page'RETURNING YOUR ITEM. The item "NJS Short ABS Rack Flight Case Front and Rear Opening Choice of 2U 4U & 6U" is in sale since Friday, October 13, 2017. This item is in the category "Musical Instruments\Pro Audio Equipment\Cases, Racks & Bags". The seller is "worldwide1985" and is located in Margate, Kent. This item can be shipped worldwide.